Previous Next
OK – so how do we do this??

Good news – Chris and Rosie from Chalk Hills Bakery  were really interested in the idea of making beer from their unsold bread. We were also glad to hear that other people are already out there doing the same thing as us (not just ancient Egyptian civilisations): Toast Ale are brilliant champions of food waste reduction, using a wide range of left over bread from many sources to make beer.

But whatever other people are up to, the challenge for us still remained – how do we brew a beer that truly gets the most out of the delicious artisan bread at Chalk Hills? As well as addressing issues of food waste this needs to be a beer worthy of such a delicious ingredient.

To call myself a brewer is probably stretching the truth. Lets settle for enthusiastic amateur and frequent beer drinker. Anyway, I’ve always believed that childish naivety unlocks great ways of doing things and I’m certainly full of that. Also, having spent a lot of my working life coming up with new booze ideas for other companies how hard can it be?!

First things first – some expert advice. That has come in two forms so far: 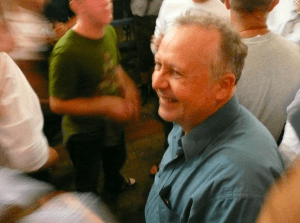 Tim O’Rourke  is a font of all knowledge on all things beer. Apparently brewing has been in his
blood since the 1900’s but I don’t think he looks that old. With 35 years experience as a master brewer he’s set up breweries around the world and more recently focused on passing on that knowledge through his expert training. Fortunately, he was as intrigued by the idea of a beer made from bread as I was and has been invaluable in getting our heads around how to do this. 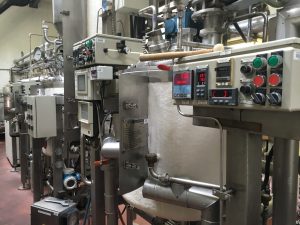 he second was to get a bit technical – I know my way around a brew but I (and Tim for that matter) had no real idea of what role bread can really play in the process. How much should we use? How should we use it – crumbed, shredded, toasted? How well does it actually convert into fermentable sugars and, most importantly, how well can we truly capture the flavours of the delicious bread to create a really stunning, unique beer? Help came in the form of of Campden BRI – guys with some serious kit (and white coats, it’s always good to trust people wearing white coats).

After a lot of very stupid questions on my part and nodding enthusiastically when the conversation got too technical, essentially the answer was YES, it would work. We cracked the optimal proportions to truly get the most from the bread and it turns out the best form for the bread was crumbed.