And the winner is…… the crowd

Previous Next
And the winner is…… the crowd

You could cut the tension with a knife.

There we sat, all looking far smarter than we usually do 364 days a year. Surrounded by 400 of Surrey’s best food producers, retailers and general big wigs. Adria had even cut his beard off as, it had been so long since he washed it, he wasn’t sure what was living in there. 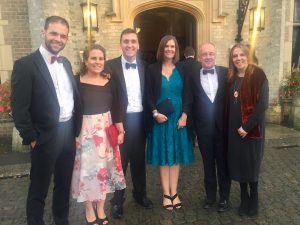 We’d just had the most delicious meal and plenty of wine to wash it down with but now was our moment. Nick Owen, eminent news reader and national treasure, clasped an envelope in his hands.  “Now it’s time for the Surrey Life Food & Drink Award in the Innovation category. The winner is………..”

My life flashed before my eyes. I hadn’t felt such a sense of anticipation since we tasted the first ever brew of Crumbs Amber back in May. Will it taste great, will it not.  Have I been wise to just create 3000 litres of this stuff or will they be sitting around unsold in 10 years time….? Thankfully the answer on that occasion was it tastes great.

Back to the present and the outcome was far less certain. We were up against two great competitors in Briscoes Jelly and Silent Pool Gin. We’ve made it to the final three which is a great achievement in its own right but wouldn’t it be great to scoop the prize after only being around for 3 months!?! 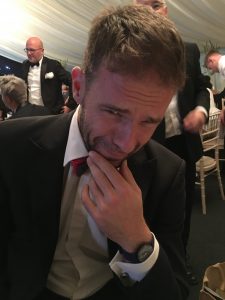 Adria fights back the tears

The golden envelope was torn open.

I never thought I’d ever have to do that “gracious in defeat face” but I think we all pulled it off quite well. At no point did I get the urge to stand up and shout “It’s not quite as good as beer made out of bread though, is it?” at the top of my voice, turn the table over and storm out…..

Well, maybe I did for a fleeting millisecond, but the grown up in me won over. We moved on, drank, the bar dry and jumped in a cab home. I’m sure the phrase “this time next year Rodney…” was uttered quite a few times on that journey.

Turning to the crowd

So what should anyone do in such a circumstance of loss and disappointment!? Turn to their friends of course. 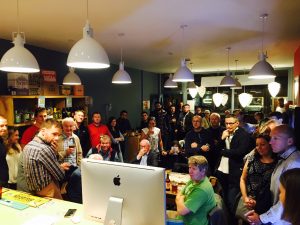 Well, in this case, turning to about 200 of our fellow crumby friends and Facebook/ twitter/ insta-tingy supporters for a bit of a knee’s up and the launch of our latest venture into the unknown – our Crowdfunder campaign. It was an excellent night, hosted at the very fine Four Hops craft beer shop in Reigate. Thanks again Martin for letting so many people descend on your shop and let us give them beer for free (each one has promised they will come back and buy plenty from you in future – honest)!

Remind me what this crowdfunder is all about again?

As regular readers will have heard us mention on one or two occasions (OK – quite a lot just recently, sorry for that), we are raising money to develop and brew two new beers using two different leftover loaves from Chalk Hills. Specifically, their delicious sourdough and rye loaves.

I won’t go over it all here again but suffice to say you’d be bonkers not to give it a look. For as big or as small a pledge as you can offer you’ll be the first to try our new beers, get your hands on some exclusive goodies and even get an invite to (another) knees up with us in Reigate once the beers have been made (can you see a theme developing here).

At the time of writing we are so close to being one third of the way to our target – we’re so grateful for the support we’ve had so far but there’s still a way to go. As a well known supermarket said – ‘every little helps’. Please help us continue our journey with more lovely brews.

Just in case you missed it the web address is www.crowdfunder.co.uk/crumbs. Did you get that? Go on, CLICK THE LINK! 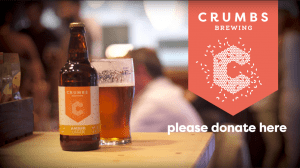 There is also a pretty spectacular short video for you to watch. I won’t spoil the surprise but suffice to say we are hoping to help overcome our Surrey Life Food and Drink Awards disappointment with a trip to the Oscars next year. The red carpet awaits….