Beer made from bread?!

How exactly do you do that!?

It’s the question we get asked most often. Well, if you’ve read any of our blog posts you’ll know there is a long and very ancient history of baking and brewing being closely linked. We’d love to say we invented the idea of beer made from bread but it was more a case of rediscovering and modifying an approach that’s already been around for a few thousand years!

The biggest driver of our approach was ensuring the bread contributes as much flavour to the brew as possible. As our beers are made from leftover artisan bread we were keen for them, not only to do their bit for the growing problem of food waste, but also do justice to the loaves that are lovingly handmade by our baker. 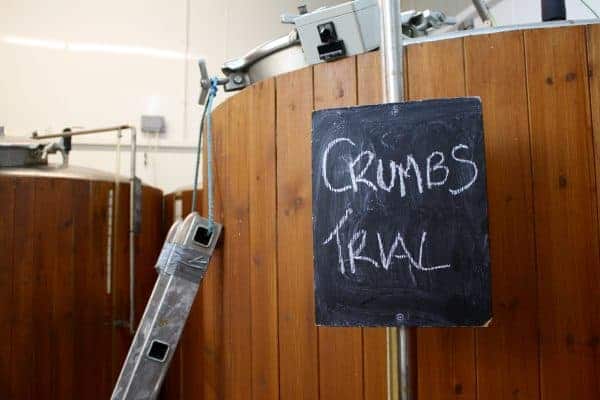 With the help of an experienced Master Brewer, Tim O’Rourke,  the technical skills of Campden BRI and a series of mashing and fermentation trials, we found the best way to get the most from the bread was crumbing it. Hence our name!

The breadcrumbs replace about a quarter of the malts you would typically use to brew. That’s about a slice of bread in every pint so not insignificant! They provide another form of starch that breaks down into sugars and then ferments into alcohol. A lot of people assume that the bread adds the yeast to the process but the baker’s yeast has been used up by the time we get our hands on it. We still add a brewer’s yeast to each brew to ferment it.

Our biggest challenge as we scaled up to brew our first beer made from bread, our Crumbs Amber Lager, was the risk of what’s called a stuck mash. To those not familiar with brewing, the mash is the first stage of the process where you mix all the lovely ingredients together in warm water and draw off the sweet sugary liquid called wort to brew with. Adding soft, sticky breadcrumbs to this process can risk it all turning into a very gloopy sludge and becoming ‘stuck’. Thankfully after a few interesting experiences (and some very nervous brewers), we’ve found ways to overcome this and let the whole brew run smoothly. 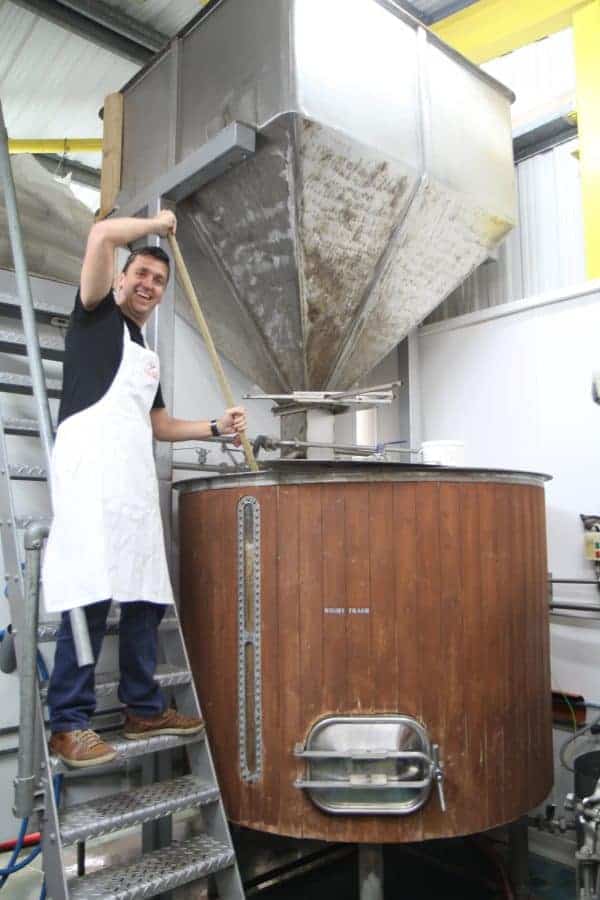 After that, the whole process is pretty much identical to brewing a normal beer. The sugary wort is boiled with a variety of hops at different points. Again we choose our hops to try and compliment the natural flavours that are present in the bread – whether that’s the maltiness of our Amber or the zesty style of our Sourdough Pale Ale. Finally, the brew is cooled, the yeast is added and the beer is left to ferment. Depending on the style of the beer, a few weeks later, our beer made from bread is conditioned and ready to try. We’re obviously very strict on our quality control, so tasting is rigorous and frequent!

We were really proud of our first brew, Crumbs Amber Lager back in June 2017. Based on a Vienna-style lager recipe, cold conditioned and filtered to make it light and easy drinking with a delicious malty finish. There are elements of both lager and ale in the style. You could say it’s the ‘Best of Both’ of the beer world (although I’m not sure Hovis would be too happy about us calling it that)

Since then (and with the help of a wonderful bunch of Crumby Crowdfunding Supporters) we’ve added more brews to the range each using a different style of loaf to give the beer a different character. A zesty Pale Ale that uses the distinct tastes of sourdough bread in its recipe and a dark and mysterious Rye Ruby Ale. The Rye bread that makes it is laced with caraway seed so adds a real complexity to a distinctly rich beer. 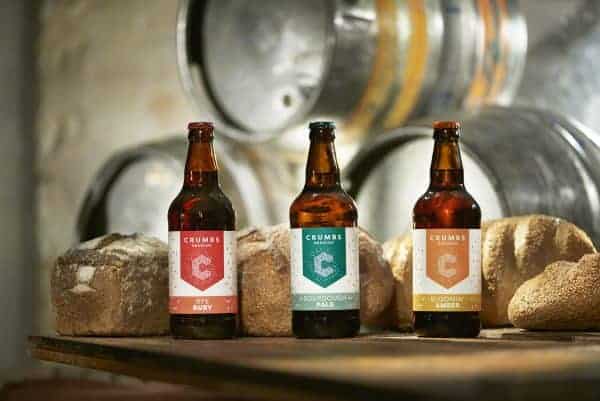 Our most recent beer is the bad boy of the bunch. A 7% abv Rye Coffee Porter. As well as Rye bread it uses leftover coffee grounds from the coffee machine at the bakery. It’s amazing how many leftover grounds it produces everyday and the team really struggle with what to do with them.  The coffee producers that supply the cafe, Union Hand Roasted Coffee, also gave us a great tip with the brew. They suggested we add a little cold brew coffee to the beer while it is fermenting. It worked a treat – the resulting beer is strong and dark but has a lovely, almost chocolatey, depth. 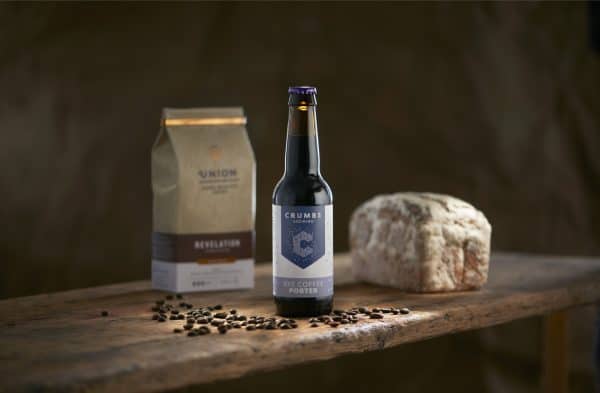 The effort we put into our brewing process has allowed us to truly get the most from our most important ingredient – the leftover loaves that would otherwise be wasted. Watch this space to see what we come up with next!

So, beer made from bread. It is possible and, we can assure you, it tastes very good!  But don’t just take our word for it, check out our Untappd reviews, we’re also on the Craft Beer Hour ultimate beer list. Most importantly, pop to our  ONLINE SHOP to give them a try!